Wilhelm Sasnal's first feature film shows two days in the life of an unnamed village, most likely located in Poland. The time in which the story is set is never specified, but there are hints that it is sometime after World War II. The characters are the eponymous Swineherd employed by a crude and brutal Farmer, the Farmer's sheltered and mistreated daughter Kaśka, a village girl named Julka, and a mysterious drifter with a guitar whose presence annoys the locals. Residents of the village are all alike in their fear and hatred of strangers, and in the contempt they have for one another. This is probably due to their unfulfilled longing to escape: no-one makes any effort to leave, yet prevents everyone else from doing so. The world in Sasnal's film is a dunghill of debased rural life. Houses resemble prisons, barns are hiding-places for looted goods, strangers get locked up in barns, graves contain gold instead of bodies. The air is thick and sticky; flies swarm everywhere. Clouds of heavy smoke rise in the distance amid the baying of dogs.

Unfolding in a secluded Polish village by the woods and a river „Z daleka widok jest piękny“ (It looks pretty from a distance) is a love story between a scrapper and a girl. In an air of ubiquitous secrecy the villagers and the couple live their usual dull lives of hardship until the scrapper vanishes. His disappearance triggers a chain of unexpected events. In the strikingly beautiful surroundings, under the schorching sun human evil surfaces. 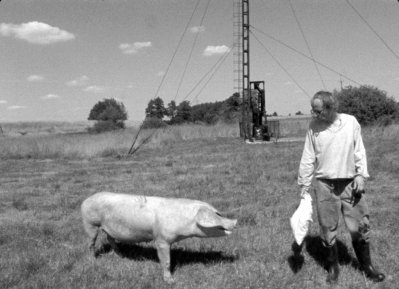 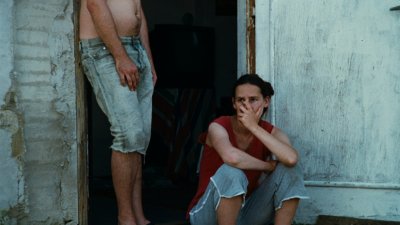