„Natural collectivity“ is the effect of the continuity of the same matter. I understand „natural collectivity“, which is dived into living and non-living matter, as a symbiosis on a interpersonal level as well as that between nature a civilization. The classification of matter is relative as its status changes over time. Beyond that, the degree of knowing the difference is incomplete due to the imperfection of human cognition apparatus. The form and processes in nature are fluid. Autonomy is an illusion. The responsibility resulting from understanding this interdependence results in a conscious creation of the surrounding. Understanding is of prime value. An intuitive message creates an alternative form of communication.

The past of matter is unknown. The accumulation of experiences, previous states as well as configurations is recorded subconsciously. A human, who encounters an object – a composite of strange, unknown and eternal matter – should identify with it in a natural way. Objects are active arrangements, stimulating and oppressing, they force one to establish a relation to them. The memory of matter obliges us to be responsible for the things we own. Creating new objects is dangerous due to the risk of interacting with the remaining matter. Forming matter into objects, causes a partial purification from its previous states, by assigning new meanings.

I was initially contemplating whether I’ll manage going from Brno to Prague right after my return from Venice at night and a day earlier … But in the end I could not resist – and it was the right decision having this new experience from this year’s Venice Biennale because also there we could quite often see what contains, in my opinion, truly original essence – authentic creation by Monika Zawadzki, new re-evaluation and interconnection of two spheres, which are key for art of the 1960s and 1070s in a new and current context. Of course back then, they were the sternest images of reduction and dematerialisation, which included within the scope of sculpture first minimalist and shortly after even conceptual ways of articulation created in the most radical cases only by verbal formulation. Today these are classical solutions the repetition of which would be pointless. After all, even the founders of both spheres gradually added other certain aspects – for instance colour and some conceptualists also space. Monika accepts the existing changes in art during the past several decades; she naturally accepts even the post-modern lesson and searches new possibilities of using the language of geometry (which has been quite exhausted in purely aesthetic designs). And she finds her own image of conceptual semantics adherent with a certain relation within the scope of each individual work. This way a “statue” which is at the first glance reductive, robust and quasi-minimalist and takes up practically the whole room, is the so-called “en detail” composition of spatial structures of several geometric elements, however its actual message is articulated through the relationship of a purely geometric form at the top and a conceptual semantics on the bottom part, created by an extremely conventionalised, character reduced hand form. The message of this artist is primarily the relationship between the purely reduced form and the semantic form. At the same time it is just the choice of hand that is truly the “significance par excellence”, because it is the hand that brings the maximum amount of connotations, references and relationships. If during a large sculptural realization we perceive also this sui generis robustness as one of the connotations, then in its loop-like repeating video, we see, on the contrary, the most delicate possible intervention: in the anonymous, so-called “symptomless, generally human” face the only geometric form are the eyebrows accentuated in black – that shifts, however, from one sequence to another and this way this geometric form is maximally subtle. But perhaps exactly the subtle relationship of the “portrayal semantics” as a human face and its commenting by this free, minimally geometric intervention, is once again that exact relationship that the artist wants to thematise. And in an even more playful way she starts her subtle significance in a projection where one female body remains without a head – and this head, once again anonymous and symptomless acts as a bust on a pedestal standing next to it, once again with a maximum amount of connotation! Another communicative enlightenment of the exhibition came about when the artist asked for “intervention” by an artist already internationally reflected – and Dan Perjovschi gave her one drawing for the time of the exhibition that she could use in any way she liked – hand out copies to visitors or perhaps have it printed on t-shirts! It is another implication of the important context for the artist alone and at the same time it is a reflection of her issues in the author’s lapidary drawing form.

In my opinion, the work of Monika Zawadzki (that is how the artist wants to use her name – and that also shows something about the context she wants to be perceived in!) is the current articulation of the absolutely contemporary and new issues – relationship within the scope of re-evaluation of applying the language of geometry, which is, without a doubt, one of the ways of how to newly update the current contexts and correlations of the unportrayed and semantic…

Self-portrait With A Raven
black and white photo projection

Dan Perjovschi
Think At Have.
prints of drawing
21×29,7 cm
unlimited copies for the duration of the exhibition 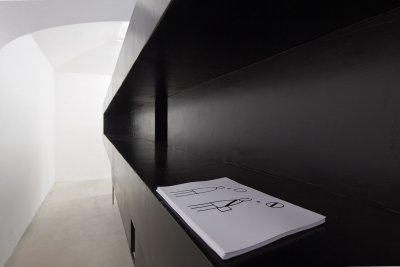 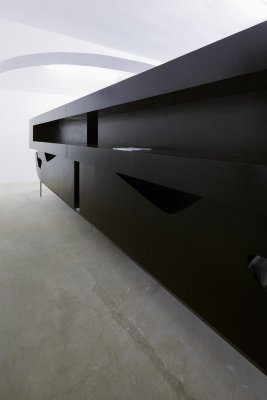 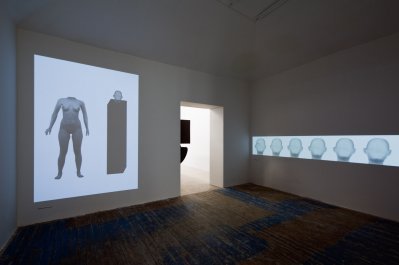 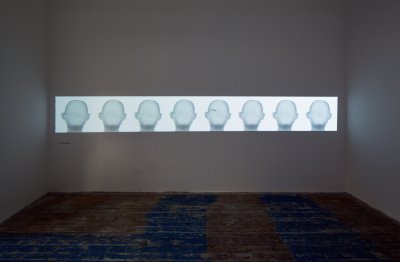 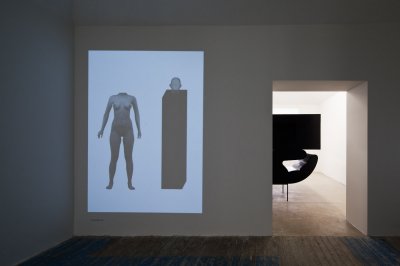 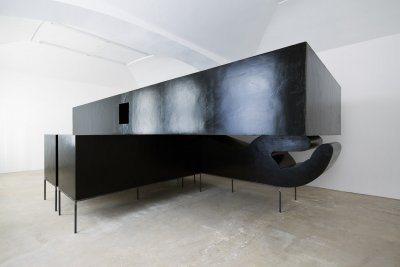 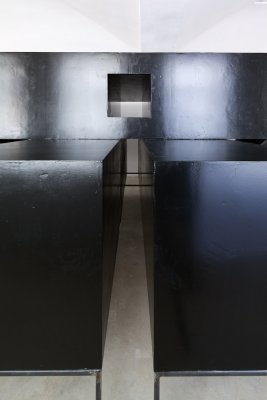